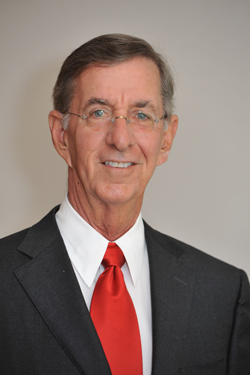 Kip Hagopian was a founding general partner of Brentwood Associates, one of the largest and most successful venture capital and private equity firms in the U.S. During his 30-year career in venture capital, Mr. Hagopian was responsible for many of Brentwood’s most successful investments and served on several boards of high technology companies. He also held a number of industry leadership positions, including President and Chairman of the Board of the National Venture Capital Association.

Mr. Hagopian served on Ronald Reagan’s “Business Advisory Panel”, chairing the Panel’s “Committee on Capital Formation, Innovation and Productivity”. In that capacity he wrote the Committee’s position paper that was presented to the President. Subsequently he served on President Reagan’s “Commission on Industrial Competitiveness”.

Mr. Hagopian is currently Chairman of the Board of Maxim Integrated Products, Inc., a Silicon Valley semiconductor company. He is also a member of the Board of Governors of the Pardee RAND Graduate School, the Board of Visitors of the UCLA Anderson Graduate School of Management, the Board of Directors of the Anderson School’s Fink Center for Finance and Investment, and the Board of Overseers of the Moshe Dayan Center for Middle Eastern and African Studies at Tel Aviv University. In 2006, Mr. Hagopian was named the Anderson School’s “Distinguished Alumnus of the Year”. In 2010, on the occasion of Anderson’s 75th anniversary, he was selected as one of Anderson’s Top 100 Points of Impact during its 75 year history.

Mr. Hagopian has been a witness at various Congressional and Executive branch hearings on tax policy, venture capital and securities law, and is an occasional lecturer at the UCLA business and law schools.

He has written two papers that have been published—one on the corporate income tax and one on the accounting treatment of employee stock options. A third paper, on the Israeli-Palestinian conflict, is posted on the Moshe Dayan Center website.

Mr. Hagopian holds a Bachelor of Arts degree in Industrial Design and a Master of Business Administration degree, both from the University of California, Los Angeles. After graduation from business school, he served two years as an officer in the U.S. Army Artillery.